Win A Car – The Vehicle Handover

How getting Fibre to the Home paid off.

It was a bitterly icy morning as the team from Home-Connect, Fibre to the Home ISP, made their way over to Toyota Bryanston in Johannesburg. You see today was a special day as Home-Connect was about to handover the keys of a brand new Toyota Etios to a lucky winner who signed up to our unbeatable Home-Connect fibre internet months earlier.

And even though the Mercury levels remained low, nothing could dampen the excitement in the air palpable at Toyota Bryanston. Rewind to about a 2 months ago, the 29th of May to be exact and Home-Connect is hosting its second Win A Car Live Giveaway Draw in the Home-Connect offices. What did you have to do to enter? Simple! Anyone who signed up to our unbeatable fibre from 27th September 2019 was automatically placed in the running to win. On the wall were placed 12 boxes, each box containing a prize and one box containing the keys to a brand new Toyota Etios. After 4 calls, the presenter Wayne D’sa, Managing Director of Cipherwave Home-Connect called Lydon. “Hello.” answered Lydon in a rather reserved and calm tone. The presenter explained the rules to Lydon and Lydon picked box number 10. And can you believe it, behind box number 10 lay a set of keys to a brand new Toyota Etios!! “Are you freaking serious right now!?” exclaimed Lydon, his once calm and reserved tone now laden with zeal! “You are our Toyota Etios winner” thrilled Wayne, “Oh My Word! That is amazing. Wow guys, thank you!” said Lydon.

You can watch the full Win A Car Giveaway draw here

Best giveaway from the best ISP. 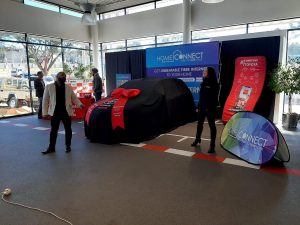 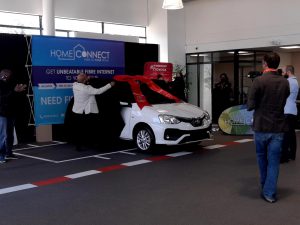 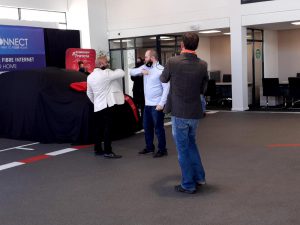 Friday the 12th of June was Lydon’s big day. Because today was the day he claimed his coveted prize. Toyota Bryanston with its high ceilings and beautiful aesthetic charm proved the ideal place to officially handover the keys to new car owner, Mr Lydon Oliver. As Lydon made his way into the car dealership the brewing excitement was galvanising! He casually sprayed some disinfectant on his palms and had his temperature checked at the door before meeting his automobile prize all sweetly wrapped up in a red bowtie as Toyota Bryanston team along with the Home-Connect ISP team clapped in applause of his winnings. The cloth was slowly removed to reveal a brand spanking new Toyota Etios as Lydon’s demeanour turned to one of heartfelt gratefulness and thankfulness.

“It couldn’t have come at a better time than now.” enthused Lydon in an interview shortly afterwards. Unfortunately, Lydon’s car had broken down 8 months ago and due to repair costs being so expensive, Lydon was left stranded with only his motorbike to cart him around. “Monthly shopping was a nightmare!” Said Lydon. This was Lydon’s first ever brand new car! “It’s my first brand new car. And it smells amazing.” Said Lydon. “I’ve never ever had a brand new car in my whole life, I’ve always had second-hand cars and my experiences with second-hand cars hasn’t been that great but I can imagine – this experience will be amazing.” Lydon then signed all the papers to place the car under his name and afterwards the team along with Lydon enjoyed some delicious lunch and coffee provided by the dealership before Lydon had the honour and privilege of driving his brand new car off the dealership floor and on to beckoning adventures.

The team at Home-Connect would like to extend massive congratulations to Lydon Oliver!
And we’d like to thank all those who took part in our Win A Car competition!

With Home-Connect Fibre to the Home it always pays to #FlipTheSwitch. How to Save Money this Festive Season

Recover from the Lockdown Financial Blow